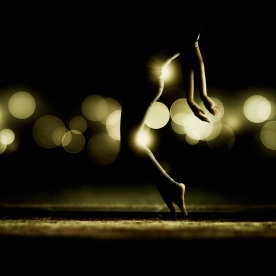 The music swelled, coaxing Sarah’s emotions to swell with it. Three weeks she’d danced this dance, six nights each week, but tonight was special. This final performance had drawn their largest crowd, and this dance, the finale, was her favorite.

Every night, the grand mirror, the only prop for the final number, captured an amazing view that only the dancers ever see. With their bodies twirling gracefully on a darkened stage, Michael, the male lead, would dip her in one strong arm, their build-up for the final kiss as the curtain fell. As she turned past the mirror, their bodies would be silhouetted against the flashes of a hundred cameras, flashes of adoration, blurred like headlamps in the rain. The image was stunning, and Sarah strained to see it each time.

Tonight, it was more than the final dance of their final performance. It was more than the emotional conclusion to a successful engagement. Michael had turned his ankle racing for the bus on his way to the theater, tearing a ligament, and it wasn’t Michael’s arms cradling her as she danced, it was Chris’.

Chris was a dream; he was Sarah’s dream. She cried the night they announced he would only  be Michael’s understudy. In her heart, of course, Chris had been the one to earn the distinction of the lead, and to dance in her arms. She had dreamed of eighteen nights, dipping backward into his strength, savoring each kiss as if it was real, an expression of her honest, unspoken love. The shocking decision had crushed her when it came. More crushing still, was that Chris seemed to be the only member of the company not to notice her at all backstage.

Now, Chris had no choice but to notice her. Now, Sarah’s moment was near. Her heart was racing furiously as she arched back in Chris’s unwavering hold. Spinning elegantly, gracefully, she kept her eyes closed, sensing the position of the mirror from the orbiting sounds of the theater. Her kiss was coming and just before it, her picturesque moment.

As she spun past the mirror she opened her eyes for just that split-second glimpse that the aperture of a camera would see. The raindrop flashes filled her eyes as she quickly shut them again. Sarah shrieked a startled cry, lost her balance, and fell to the stage floor on her butt in shock. Chris hurriedly reached a hand to rescue the ruined moment and at least give the audience the kiss before the curtain. Sarah sat still, trembling, unable to take his outstretched hand. She was sure she had only seen one body silhouetted against the reflection of the flashes in the mirror.

Image "Webster's Kiss" © 2011 Anne Schilde Thanks always for reading! ♥
View all posts by Anne Schilde →
This entry was posted in Stuff... cuz I like to write stuff! and tagged Fiction, Picture It & Write, Sarah (Annie's diaries). Bookmark the permalink.