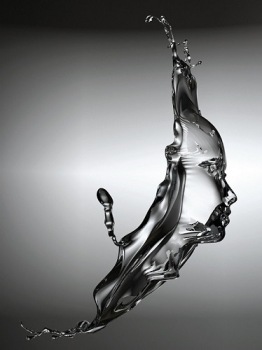 I was six when Nana first rescued me from the mundane world of the concrete. Other kids got their stories about fairies from Peter Pan and Fern Gully. I got mine from the nasturtium in Nana’s garden. Nana died when I was twenty, but in the fourteen years she blessed me with, she never ceased to offer me the sanity of believing in a world that wasn’t defined by fair values, crossing streets at the crosswalk, and stories previously written. Life, she said, is always more than meets the eye.

She was bed-ridden for the last few weeks before her death. Emphysema was suffocating her slowly and she seemed content in accepting that fate. I couldn’t watch her die. It was too much for me, a threat to everything she’d taught me. Her loving words and her gentle touch had dispelled my physical pains as silly, convinced me that the ghosts I saw were my friends, and assured me beyond reasonable doubt that, in her psychic foresight, she had already seen me all grown up. How could she possibly be dying when I still had so much growing up to do!

The last time I saw her was the last time I was brave enough. It was about a week before she died and I went to visit her alone. I sat next to her on her bed, bummed one of her cigarettes, and together we sucked in those rapturous poison fumes in defiance of death and of all things terminal. She watched me peacefully as I blew a couple of smoke rings to hide how harsh her filterless torches were.

Nana always made me feel like her favorite. My uncle Nick never had any children, so I was Nana’s only grandchild, but I feel like I would have been her favorite anyway.

“You can take a pack if you need them, Honey. I have more than I can ever possibly finish.”

I gulped a little smoke. The desperation of college poverty was outweighed by the pungent burn of unmitigated throat cancer, but it was the second part of her offer that caused me to gulp. I lied. “It’s okay. I just forgot to stop at the store on my way here.”

“Go ahead,” she insisted, mistaking my lie for modesty and tucking the newly-opened pack into my purse. She opened a cupboard to reveal at least a hundred more packs of three different brands, all in perfectly neat stacks as if my own OCD had stacked them. “Shh…”

“Nana!” I was appalled. She was dying of emphysema for Christ’s sake!

“They won’t kill me,” she assured. “I only smoke three cigarettes a day. I’ll be dead long before that can kill me.”

The cigarette between my fingers sat idly. “You can’t die,” I finally said, maybe more out of selfishness than anything else.

I stared at my ash growing longer and longer now of its own accord. My lips began to tremble a little bit. “You said you saw the future and I had a baby girl and, and…” The tears were something that didn’t fit my hardened self-image.

Nana grasped my hand. “Sweetheart! I never said I saw that with this body!”

My head reeled. My stomach turned. I don’t think the strong tobacco helped either of those things. “You’re gonna be okay, Nana,” I finally said. It’s what other people taught me to say.

“Of course I am,” she laughed, squeezing my hand tighter and then letting go. “There’s nothing wrong with dying. It’s actually a good sign your body is behaving quite properly the way it’s supposed to!”

At twenty, I’d already narrowly escaped death five times, and I suddenly felt guilty, as if I had cheated the capital Death and now Nana was dying because of me. It was too much for me and I kept quiet.

Nana diagnosed my silence better than she had my previous lie. “Come see me again next Thursday,” she said. “I’ll show you something special. Something you’ve been waiting your whole life to see.”

I understood. My hand instinctively caught the ash from my cigarette and dumped it gracefully into the ashtray where I crushed the nearly unsmoked butt behind it. My mind raced with all the things she’d taught me about memories being forever and only the people who make them being temporary; like actors in a play.

“Annie,” she said when I was done staring at the ashtray. “Death isn’t the end of life. It’s part of life! It always has been.”

She meant it metaphorically of course, but I let myself hope for an instant that there was something I could do.

Nana smiled at my confusion. “Everything we ever do in life is forever,” she said. “We think we are the important part of it all, but we are nothing more than tiny raindrops in a grand storm.”

I stared quietly at the ashtray where my fingers still held prisoner what will remain my last cigarette butt.

“So yes, each little drop washes back into the sea when it’s done, but they’re never really gone. They’re a part of all the raindrops to come. Each raindrop is new of course. If you look closely at them though, you can still see the faces of all the other raindrops.”

I looked up at her. My fingers reeked like the ashtray. I couldn’t say anything.

Nana rummaged around in one of her drawers. She pulled out a little piece of paper and showed it to me. It was a little song I’d written for the frogs in her back pond when I was six. I was shocked that she still had it after all those years. We spent the rest of my visit talking about writing.

Image "Webster's Kiss" © 2011 Anne Schilde Thanks always for reading! ♥
View all posts by Anne Schilde →
This entry was posted in Annie's World and tagged Annie, Death, Fiction, Picture It & Write. Bookmark the permalink.