When I Want Your Opinion… 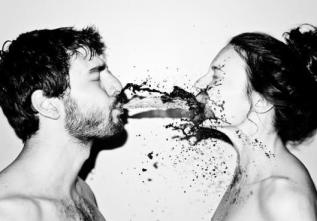 Click the pic for the original challenge. Written for Ermilia’s Picture It & Write. Haha, I know Jessi’s blonde, but it reminded me too much of one of their fights.

I sat back to enjoy the ride. Jessi isn’t one for a lot of words, but when they come, it’s usually worth the price of admission.

Jessi ignored him for the moment. “Tonight’s edition is brought to you by the words hot air, and by the letters M, N, S!” she said, enunciating as closely as she could to, “I’m an ass.”

Jeff made a you’re-so-clever face, typical of their arguments.

“It means…” she said, “sometimes I think you just open up your mouth and puke whatever comes out. You’re so hung up on bein’ the center of attention, you never pay any attention to yourself.”

“When I want your opinion, I’ll give it to you,” Jeff sniped.

“More likely shove it down my throat… or up my ass.”

Jeff shrugged. “One hole’s as good as another,” he smirked.

“But that’s exactly what I’m saying, ain’t it? We’ve been sittin’ here listenin’ to you go on all night about how Atheism is better than Christianity because Atheists don’t preach! Do you even hear the irony in that?”

“That’s not what I said at all,” Jeff argued.

“No, you’re missin’ my point! Do you even know what my religious beliefs are, Billy Teddy-Graham? No. You don’t. And do you know why you don’t? It’s cuz I never once told you. So why is it I always have to sit here and listen to yours?”

“Then maybe you should stop evangelizin’ it.” Jessi shook her head to emphasize the maybe. I swore sometimes when she got riled up, her bangs curled.

“You can’t evangelize Atheism,” Jeff said smugly. “It means to preach the Gospel.”

“Right. So the Gospel according to Jeff. I’m pretty sure we can all quote some part of it by now, but I don’t really care what you wanna call it. The point is the pot’s as black as the kettle.”

“No, it’s not!” Jeff said emphatically. “The point is I never tried to push my religion on anyone.”

“Flower’s right,” Jessi said, turning to look at me. “Never argue with an idiot. They drag you down to their level and beat you with experience.”

Image "Webster's Kiss" © 2011 Anne Schilde Thanks always for reading! ♥
View all posts by Anne Schilde →
This entry was posted in Annie's World and tagged Fiction, Jessi, Picture It & Write. Bookmark the permalink.

10 Responses to When I Want Your Opinion…