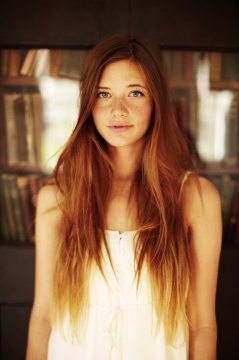 This amazing model is Lindsey Hansen. I found her photo at hmmanyways@tumbler with no mention of a photographer.

Adam Drake wasn’t always a successful author. No, it’s true! Once he struggled with the same challenges and frustrations any of us would. So what changed all that? They say that behind every great man is a great woman. Adam’s path to Pulitzer prowess was not so cliché as that, but… well, I’ll just get on with the story.

Adam sat slumped at his desk in despair. Rubbing at his throbbing temples seemed pointless, so he simply slumped, arms folded across his chest, staring blankly at the screensaver on his MacBook Pro. The dull hum of the laptop’s fan raced and then quieted as it flipped into power save mode – again. He didn’t bother to stop it this time.

Only a couple of months before it seemed, writing had been a joy, so much a joy he’d decided to make it the focus of his whole life. Left behind was the life he once knew, a life of job responsibilities, seemingly fruitless efforts, and unappreciated talent. Before him now, was the promise of his dream, only the weight of that promise felt greater than the discarded burdens of his past. It wasn’t supposed to be like that. That wasn’t how he envisioned his dream at all. It was supposed to be… well, it was supposed to be a novel!

Doubt was a weed flourishing in the fertile soil of his imagination where inspiration was meant to grow. The longer he stared at it, the less it looked like a best-seller, and the more it looked like a morbid epitaph for the safety and comfort of the life he’d left behind. A single paragraph stared back at him, mocking him until he could stare at it no more. Novels have pages, chapters of pages, not single paragraphs with more cackling cynicism than actual usable text.

Ever his friend, resignation came to his aid, massaging the aching frustration from his shoulders, begging him to relax – to give up. Its thin thumbs pushed under the muscles at the base of his neck, forcing him to admit how sore they were from the hours he’d spent letting his posture slip. Light perfume teased his nose with an almost spicy scent…

Adrenaline shot through Adam like a lightning strike as he realized he wasn’t alone. He bolted upright with a start and whirled his chair about. The beauty of the slender girl standing behind him was more disarming than her unexpected presence. Her hair was long and brown. Amazing eyes of bright green looked just as startled as he was.

Sweetly curved eyebrows shifted from surprise to a quizzical frown as her perfect smile melted away his apprehension. “Don’t you recognize me?” she asked.

Adam shook his head, half as a negative response, and half to clear a sudden twinge of guilt he felt at not recognizing her.

The girl reached out tentatively and touched a gentle hand to his cheek. “It’s me, Adam.”

Bewilderment washed the remaining traces of composure from Adam’s face.

“Sarah?” she suggested. “Sarah Martin? I’m disappointed. You promised you’d never let me be a stranger again. Don’t you remember?”

Her touch was warm, soft, and real, but that was impossible! He did remember her name. Of course he remembered her name. Sarah Martin was a character from one of his stories. She drew closer as her sensual caress slid slowly down his neck to where his aching shoulder already longed to feel her thumbs again. Adam was nearly speechless as he struggled to make rational sense of the insanity. He clasped his hand around her wrist and pulled it gently away.

“Sarah Martin is not real. She’s just a character I made up in one of my stories!”

Sarah’s tears were instantaneous, but her smile never flickered and her voice was soft. “Just a character?”

Again Adam felt the guilt that made no sense.

“You used to live for nights when you could see me,” she whispered softly to hide the tightness in her throat. “I wasn’t just a character then.” Her eyes wandered around the room, making it her own. “What’s this?” she asked, picking up a baseball from his desk to observe some words written on it.

“A gift from a friend. Those were written by men in my life who mean a great deal to me,” he explained.

“What about the women in your life? What about me?” she smiled.

Adam shrugged. “I guess it’s only role models – people I look up to.” He grimaced. “I didn’t mean it like that. I meant men I admire and want to be like. Each man wrote a word that he felt described me.”

“Servant?” she asked kittenishly as she rolled the ball around in her fingers reading them all. She returned the ball carefully to his desk, rotating it so the words champion and determined faced him. “There’s a word missing, you know?”

“Why are you doing this to me?” he asked.

Sarah’s beautiful green eyes lit up as she laughed. “You’re so funny,” she said. “Why are you doing this to me?”

Adam wasn’t sure what she meant. He was sure that her laughter was full of freedom that lifted the weight from his heart and the shackles from his spirit.

The desire for the freedom she offered tortured him. Sarah was as beautiful as any girl he had ever seen. The rainbow of freckles that arched over her nose was a covenant of hope that would always shine through the rains of failure.

“What have I always meant to you, Adam?”

“When I wrote you? You were a symbol of freedom from a life of pain and imprisonment.”

Sarah framed her face with her hands. Raised eyebrows and a flick of an I-told-you-so smile invited him to make the association. She stood up from the desk and leaned close, taking his face in her hands and pushing her fingers through his hair around to the back of his head. “Be free then,” she said, settling side-saddle onto his lap and holding her face close to his. “There was a moment once that you wished you could live in forever… do you remember it?”

Adam remembered. How could you forget writing the perfect kiss with the perfect girl? But how do you kiss your imagination?

“Time doesn’t stand still,” Sarah whispered, and she pressed her lips gently against his. Her lips were soft. Her tongue and her breath where hot. The light fragrance of her perfume tickled as much as the hairs on his neck and her fingers on his skin. Fearful it was an hallucination, he dared to kiss her back, to put his arms around her and hold her. He did love her. Love became a flame of passion that burned through his chest while they kissed.

Adam wasn’t sure how long they had kissed when his heartbeat slowed and Sarah withdrew to look into his eyes again. “Do you remember when you used to tell me quotes from your favorite authors?” she asked.

Adam wasn’t sure he remembered anything anymore, but he nodded. Sarah was a simple touch of Heaven, a sense of comfort deep inside him, a sense of peace, and of belonging to her.

“There was one quote that always meant so much to me… you said, ‘Fill your paper with the breathings of your heart.'”

Sarah smiled and nodded. “Wordsworth. It was my favorite thing you ever quoted me, Adam. I knew it meant I was the breathing of your heart.”

The breathing of her heart. Her heart! The world began to spin around in Adam’s head. “What was it?” he asked.

“You said there was a word missing from my baseball.”

Sarah nodded. “The one I would have written. The word that best describes you.”

Adam regretted for a moment the slight tease he’d written into Sarah’s character. “What word best describes me?” he prodded.

Author’s note: This is a work of fiction. Any similarities to the real Adam Drake or events involving him were intended only to make the story feel more real. The names Adam Drake and Sarah Martin and other bits borrowed from his blogs are his intellectual property and were used with his permission.

Image "Webster's Kiss" © 2011 Anne Schilde Thanks always for reading! ♥
View all posts by Anne Schilde →
This entry was posted in Stuff... cuz I like to write stuff! and tagged Fiction, Kissing, Romance, Writing. Bookmark the permalink.