Green Around the Edges

Pay no attention to the marquees in the background!
It wasn’t THAT kind of modeling job!

How could I ever forget that dreadful day? It was mid-summer of 1979. I had just started a new modeling job and I was driving home from my first photo shoot. Not many girls start modeling at thirty-nine; I know. But some kid started a silly rumor about aphrodisiacs, the next thing you knew there was a nation-wide fad, and suddenly I was getting paid handsomely to sit under hot lamps wearing next to nothing.

Traffic was a mess that day. The heat was sweltering and my miserable A/C was on the fritz again, so I was forced to drive with the windows down. I was stuck behind some guy in a root beer brown Gran Torino that needed a tune-up in the worst way, and I was gagging on the fumes from his exhaust. He was lagging in the bumper-to-bumper jam and people behind me were tooting their horns in aggravation as if it was somehow all my fault. If felt as if my head would explode, which doubtless would have been a ghastly sight, as I’m quite sure I’d melted inside by then.

Finally, my right-turn was approaching at the next intersection. There was no turn lane, but it was after 5:00 and the parking lane was empty. I had a tiny car… yes, very tiny it seems… small enough to navigate the gap to freedom. I checked my mirror and then over my shoulder to make sure no one else had the same desperate idea. When I looked back, the idiot in the Gran Torino had his brake lights lit up for no reason at all! I slammed on my own brakes, closed my eyes, threw my hands against the dash, and waited for the crash.

That works, you know… bracing your hands on the dash? It’s averted many a near-collision! Okay, maybe it hasn’t, but it might have magically worked this time. The crash never came. When I opened my eyes, I don’t think you could have slipped a candy wrapper between our two bumpers. I could read Gran Torino’s lips in his rear-view mirror. He must have thought I was eye candy. He was mouthing something about M&M drivers, or perhaps close to that anyway.

Finally, he nudged forward enough that I had room to squeeze by. Without hesitation, I maneuvered into the parking lane that spelled my freedom. Dip me in chocolate and call me Peanut, if I didn’t nick his bumper! I uttered some words very unbecoming of a lady as I parked there and waited for the Smog Monster to pull over ahead of me. Well, he did no such thing! Still parked right in the middle of traffic, he turned on his emergency flashers and got out of his car, oblivious to the blaring horns and foul obscenities that ensued.

Gran Torino was quite the tall, strange-looking fellow, skinny, with hair that was entirely too white for someone of his youth. He wore a white T-shirt, prominent with sweat stains, and blue denims he clearly mistook for a handy rag. We inspected the damage together and there was none. Just a bit of green on the corner of his bumper really. It was my car…. I blinked at it… my eyes weren’t right… it looked almost like a toy car… with the nasty gash in the paint.

“Well, there’s no need for fuss, I’d say,” I chirped gayly. “It looks like the damage is all mine.” I may have batted my eyes a bit. It’s a habit, you know.

“We’d better exchange information anyway,” he countered. There was something creepy about this fellow. I didn’t care for the way he looked at me at all. “You know how the insurance companies are, all red tape and paperwork.”

“Well, I hardly think they need to know about it then, do they?”

He glared at me suspiciously. “You’re not hiding something are you?”

“Mercy, no! But it’s just a little bit of green… why you could probably lick it off!”

“Just the same,” he growled, and he returned to his car.

I was more than a little bit flustered. The honking road-rage, and the hateful comments from the other motorists worsened the self-blame for my fraction of an inch of misjudgment. I was having a terrible time fumbling through  my glove box, oddly enough because of my gloves – white ones that were quite fashionable until they became such a cumbersome nuisance. Try as I might I couldn’t seem to remove them, but I was able to recover my papers in spite of them.

After all of that, when I produced my proof-of-insurance for exchange, the creepy fellow had returned from his car with no papers of his own! And it really was bothering me the way he keep leering at me – not the sort of look you give a girl. Why, if I believed in vampires, I’d be certain I’d met one!

“I guess we can just forget about it,” he said.

It was my turn to be suspicious. I felt certain I should demand his license at once, but I was afraid the chap didn’t have one and I would be inviting myself into one of those nightmare plots to a slasher movie.

“Very well, then,” I agreed, and I reached out cordially to shake his hand. “Good day.”

It was the most terrible thing. He took my hand, but he wouldn’t let it go! We had quite the tug-of-war over it, and the whole time, I had the most dreadful feeling that this creepy Gran Torino fellow had no intention of cutting me to pieces; he wanted to eat me alive! It was all quite unnerving.

I finally managed to pull my hand away and return to my car. I was badly shaken. After all, it’s not every day you run into someone who wants to eat you. I drove off as quickly as I could, but I was really in no condition to drive anymore. As soon as I was safely out of harm’s way, I pulled over for a quick powder. I adjusted the mirror to look at myself, and suddenly, it all made sense… 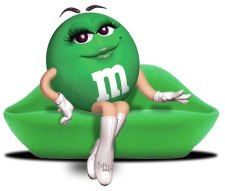 Not your every day dream!

Image "Webster's Kiss" © 2011 Anne Schilde Thanks always for reading! ♥
View all posts by Anne Schilde →
This entry was posted in Annie's World and tagged Dreams, Fiction, Humor. Bookmark the permalink.

10 Responses to Green Around the Edges