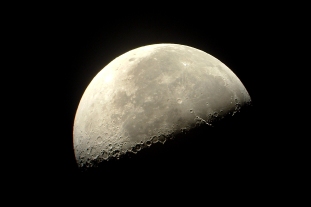 Eric poked at his potatoes with his fork. It wasn’t that he didn’t like them. He just didn’t feel like eating them. For two weeks he hadn’t felt like anything except to kiss her again.

“Nothing.” You don’t talk to your grandmother about things like kissing girls.

“Nonsense! You’ve barely touched your dinner. Your head’s been in the clouds all evening. What is it?”

“Does it have to be a full moon for the Man-in-the-Moon to talk to you?” he asked absent-mindedly.

His grandmother smiled. “You always loved the moon,” she said. “You know moon was the very first word you ever said to me? I was pushing you in the stroller and you pointed up at the moon and said, ‘moon.'”

“You might have mentioned it,” Eric said. About a thousand times.

Actually, it was because Grandma was so taken with the moon story that Eric began talking to the moon in the first place. And it was because… well, the moon talking back to him… that was the kind of thing he could talk to Grandma about.

“You can talk to the moon any time,” she said. “What did the moon say to you, Dear?”

Would it make any sense out of context? Ever since he’d kissed her, Eric couldn’t get Annie out of his mind. It was Annie who possessed his thoughts as he lay on his back in the meadow the night before, watching the moonrise over his grandmother’s ranch where he was visiting for a summer weekend. It would be the last. Annie was thousands of miles away now.

“He said, ‘your dreams’, did he?” his grandmother observed. “First person? Did he call you by name?”

His grandmother looked thoughtful for a long time. Eric was grateful for the silence that allowed Annie to reconquer his daydreams. They had been walking along the path to the end of the park that day, when her hand bumped into his and he instinctively took it. Chills ran through his whole body when he felt her gentle squeeze. It was the last time they were going to see each other until fate or a miracle brought them back together. They both knew that. It felt as if the park had cast a line and snared his heart; tugging at it; threatening to tear it right from his chest if he took one step further. He slowed and Annie slowed with him. He was sure she felt it too.

Eric turned to face Annie, torn in anguish and fear. Annie’s eyes offered nothing but anticipation…

“The moon is wise,” his grandmother interrupted his thoughts.

Eric nodded again, trying to force them back to the memory.

“I’m sure whatever your dream is, if the moon told you to follow it, you should trust him. What dream was he talking about?”

Joy flooded Eric’s heart at her affirmation. Grandma seemed to know as much about things as the moon did, and like the moon, she would never say a word to confess it.

“I was just dreaming that distance doesn’t matter,” he said. His face screwed up at the mention of the word distance. It was distance the moon had tried to convince him mattered the least… I am 250,000 miles from you, Eric. Yet I feel your heart, and you hear my words, as if there is no distance between us at all.

“I met a girl, Grandma,” he blurted at the end of his thoughts.

“I was certain of that,” his grandmother chuckled. “Anyone I know?”

“No,” he said quickly. It was a lie. Annie the neighbor’s niece. She was only sixteen. As quick as she was to point out it was almost seventeen, Eric was sure Grandma would not approve.

His grandmother spoke smoothly, as if she had been rehearsing this moment. “Dreams are sometimes difficult things to follow,” she said. “But in the end, they are really the only things we ever do. I suppose it was this girl you spoke to the moon about, and I must suppose he had a reason if he chose to answer you back. I can’t tell you about your girl, Eric…”

Eric was lost. He and Annie had reached the end of the park. When he slowed, it was as if Annie’s thoughts were in his head and his were in hers. He was dying inside with the desire to kiss her. There was something about her. She was pretty, and sexy too he thought, but it wasn’t that. She was perfect for him and he could tell she hoped she was. He knew if he took one more step, the moment would never happen so he stopped. Annie stopped too and looked expectantly into his eyes.

The kiss was like electricity. Life itself was telling them the moment was perfect; that they belonged together. It wasn’t meant to be over. Eric had never really kissed someone he was in love with before. When Annie reached her tongue to touch his, it tickled inside his chest, separating him from his body in a mad rush to join her in hers…

“…but I can tell you she met a very special young man.”

Annie disappeared. There was only his grandmother.

“And I can tell you that when the moon offers advice, it is the special young men who choose to follow it.”

It had been two weeks since Annie’s kiss, the most perfect moment of life that could never be tasted again. Eric looked up from his potatoes at his grandmother. “She’s in South Carolina now,” he said sullenly. “She’ll meet someone else and forget about me.”

“I suspected you meant Annie,” his grandmother smiled. “Distances are not so great as they used to be. You must still talk to her.”

Eric frowned. Grandma always seemed to know more about what was going on than she let on. “How did you know it was Annie?” he asked.

“You’ve been visiting quite a lot since she first arrived.”

“But nothing happened until the day she left.”

Eric was confused. He couldn’t understand how anyone could have seen what he was sure he had not seen himself.

“Well,” his grandmother said. “It seems you’ve been given some very sound advice. The only question is, what do you plan to do about it?”

The following morning Annie opened up her email to find a message from Eric. It read:

I thought he knew something that I didn’t know
so I asked him to see what he’d say.
“Open your eyes, but see with your heart,
and follow your dreams,” the Moon said.

I opened my eyes and saw your bright smile.
I had to start smiling too.
My heart could see clearly, the moment we met,
that I wanted to be close to you.

My dreams said to love you with all of my heart
and that you’d fill my life up with light.
“Follow your dreams,” said the Man-in-the-Moon.
I’d like to believe he was right!

Image "Webster's Kiss" © 2011 Anne Schilde Thanks always for reading! ♥
View all posts by Anne Schilde →
This entry was posted in Annie's World and tagged Annie, Fiction, Picture It & Write, Poetry. Bookmark the permalink.

19 Responses to The Advice