The Secret in Nana’s Garden 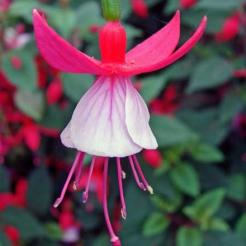 This has always been my favorite flower. They look like little fairies!

The excitement in Nana’s whisper piqued my curiosity instantly. It meant she had a secret to share! She repeated the invitation urgently with her hand and I stood up from my seat in front of the television. Nana took my hand, and led me out into her garden.

Nana’s secrets weren’t the super-secret kind I couldn’t tell anyone. They were only secrets we kept from Daddy. Nana’s house wasn’t as much fun as Jessi’s, but like Jessi’s, it was a place where the things I was forbidden to do at home were often encouraged. Sometimes, I think Nana did that more to spite Daddy than for my own benefit. She never thought much of him.

“Be very quiet and don’t make any sudden movements,” she cautioned as we stepped off her back porch.

My heart began to race with the pure thrill of the adventure. Our collection of secrets were treasures to last me a lifetime. She led me around to where her fuchsias grew and leaned over with her cheek next to mine, pointing between the leaves and flowers to a dark shadowy area to one side of the bush. I stared intently. The fuchsias were the prettiest flowers in Nana’s garden, but to my child’s mind, they didn’t seem like much of a secret.

“Do you see her?” she whispered.

My pony-tail bounced back and forth on my shoulders.

“You have to look very carefully. You can’t see her with just your eyes.”

I was only seven, but I thought I understood. I let go of the strict physical images of the fuchsia plant and let my mind see what I thought I saw there. It was faint at first, but it was there: a shimmering light about six or seven inches tall, dancing in the shadows beneath the leaves.

I wasn’t sure. What I saw didn’t really look like a her. It was more like a fluttering butterfly of colorful light. “What is she?” I asked, pretending it looked different.

“She’s beautiful,” I said, and the more I watched, the more I saw her, and the more beautiful she was! Her wings looked as if they were made of pure magic, and her dress was as delicate as the petals of the flowers. “She’s so tiny!”

“I think they’re really much bigger and that’s just the way they appear to us.”

“What do fairies do, Nana?”

“I don’t know,” she chuckled. “I’m sure I don’t speak a word of Fairy! I think they help things grow.”

“Is she always there?”

“No. I’ve only seen Naida a few times. Deianira is the one who’s here the most often.”

“I don’t think so. I haven’t seen her. She’s usually over by the nasturtium. I have pictures of her, though. Would you like to see them?”

“You have pictures of fairies?”

She smiled. “Just the three from my garden. Come. I’ll show you.” She took me by the hand again to pull me reluctantly away from the hypnotic sparkle hiding in the fuchsia. “I’ve seen others, but I never seem to have my camera with me.”

Nana took me back inside and sat me on the couch. She went to fetch a photo album and returned to sit by my side. The album contained quite a few pictures of the fairies! Some had Nana or her friend Lottie posing with them. In each case, they seemed to my untrained eye like they were just spots of light in the pictures, but why would Nana and Lottie pose next to an ordinary spot of light? There was one picture Papa must have taken because Nana and Lottie were both in it and the fairy had come out of the flowers to pose with them.

Nana ran her finger over the picture. “This is Kristabelle,” she said.

“How do you know their names if you don’t speak Fairy?” I asked.

“Oh honey,” Nana smiled and petted my hair. “Those aren’t their real names, those are just names I gave them. I picked them from Greek girls’ names because I thought they sounded pretty.”

Kristabelle looked much more like a fairy than any of the other pictures. You could even see her eyes and the outline of a face in the picture.

“She’s the prettiest,” I said. “How come her wings are bigger?”

“You know, I don’t know. I don’t think they really are wings.”

“Yes they do! But I think… I think fairies and people live in different worlds that are just connected through the flowers somehow. I think they push through to look at us sometimes, and it makes light come out wherever they push through. The light shimmers and dances behind them as they struggle to stay focused in our world, and so it looks to us like they are flying on wings of light.”

I don’t remember another word Nana said as she turned the remaining pages. I was lost for the rest of the day. Lost in another world where fairies lived, wondering if I looked to them like I had wings, and what they would name me.

Visits to Nana’s never again involved the television set. I would ask immediately if we could go to the garden where I would play with the nasturtium. I never got to meet Kristabelle or Deianira. In fact, I haven’t seen a fairy since. Once, when Nana took me on one of her nature walks, she said she spotted a fairy, but by the time I looked, she was gone.

Image "Webster's Kiss" © 2011 Anne Schilde Thanks always for reading! ♥
View all posts by Anne Schilde →
This entry was posted in Annie's World. Bookmark the permalink.

24 Responses to The Secret in Nana’s Garden