Half in a Dream 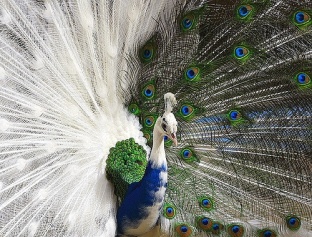 Click the pic for the original challenge. Written for Ermilia’s Picture It & Write. Half albino! How cool is that?

“What’s the matter, Flower?” Jessi’s hands rested on my shoulders and began pressing out some of the tension. “You look depressed.”

I was depressed. My head gratefully dropped to my hands on the lunch table and I relaxed under her touch.

Ms. Williams was expecting my column for Sarah’s Window by sixth period. It wasn’t that I hadn’t written anything. I’d started writing four different topics and only made it halfway through each one before I felt like I just ran out of words. Empty. Drained.

“Nothing really,” I answered. “Sometimes I just feel like something’s missing in life.”

Jessi laughed. “Like fun?” Her laugh felt almost as good as her fingers.

“You’ve been saying that since kindergarten,” she scoffed.

“It’s only when I’m awake. It’s like when I’m asleep, everything seems complete and free and I’m full of imagination, and then I wake up and all the color drains out of me.”

She laughed again. “Cuz you only get like this on Tuesdays, Dork! What were you gonna write about?”

“Buncha stuff, actually. I started writing about mortality, you know because of… We’re young and we think we’re going to live forever and then something like that hits so close to home. It was just writing though. I wasn’t making a point, like my article wanted to prove its own mortality.”

My free massage started working its way down my back. Some days I could just kiss Jessi.

“I started writing about what makes people think they’re ugly. Nice, right? The Ugly Duckling on Self-Deprecation.” I tried to gesture with my hands and she pushed me back down.

“Shh! You’re beautiful,” Jessi said. My smile was hidden where she couldn’t see.

“It’s getting old anyway. There are more important things than looks. I’m still pissed off at that dork Chad for cheating you, and I started writing about why guys can’t be faithful and stuff. Did you know a peacock is so faithful if something happens to his mate, he dies of a broken heart?”

“It probably is, but so what? It’s cool. Anyway, I realized some girls are cheaters too, and I was only telling half the story. I couldn’t finish because I wasn’t mad at girls. There was no color.”

“You’re not really mad at guys either. Just Chad.”

“Then that peacock thing got me thinking about pride. You know how cheesed I get at Jeff for that. Only I couldn’t finish writing that either. Jeff would know it was about him and then he would know I wrote it.”

“You don’t think you’re the only one do you?”

“Huh?” She caught me off guard.

“We all want to go back to sleep when we wake up. Shit, Billy sleeps through first period all the time!”

Jessi dug her thumbs into my lower back above my hips and worked the tension outward. I could only groan with relief.

“Hey wait,” she said. “Aren’t peacocks a symbol of immortality?”

“So it sounds like you knew what you’re going to write all along,” she said.

“What do you mean? I can’t write about peacocks in Sarah’s Window.” I was having trouble concentrating on anything but her fingers.

“Not peacocks. Imagination. You said it yourself. When you wake up you feel like all the color drains out of you.”

“So quit trying to think your words and dream them, silly.”

That was easy enough. I was so relaxed from her massage I could feel myself nodding off right there in the lunch area.

What is it we do when we dream? My parents are always after me for being sleepy, wondering what I did that made me so tired. But it’s not just me. None of us wants to wake up in the morning and leave behind the comfort of our dreams. Some of us even try to sneak a few more dreams in first period.

I realized this afternoon, with a little help from a friend, that it’s because our dreams are the color of everything we do. Imagine a beautiful peacock without all its color…

10 Responses to Half in a Dream