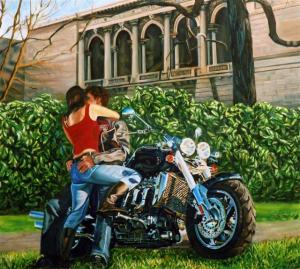 Maybe I was just a little jealous…?

“She’s not coming,” I said. I couldn’t say why, not with our little brother Ricky sitting in the car.

Carmelita continued to stare down the highway expectantly. If she knew my thoughts, she wasn’t letting on.

“I can just take you to your car, Sis,” I offered. “There’s no reason you should be late, just because, Mamá’s got a…”

Her sharp glare cut me off. “I can’t just leave,” she said in a worried voice that didn’t reflect her angry expression. “What if something’s happened to her?”

“You know exactly what happened to her,” I squinted, glancing quickly over my shoulder at Ricky in the back seat. He wasn’t paying attention, eyes glued to his PSP. I looked back at my phone for the time. 5:17.

Every year, my Uncle Ray hosts a family get together. It’s kind of a tradition. I love my Uncle Ray, but it’s a six-hour drive. I had to work Monday morning. I wouldn’t even have come this year if Mamá and Ricky had another way to get there. “No te preocupes,” was what she’d said when I reminded her I had to leave by 5:00. That was at 7:30 in the morning… on Saturday. She hadn’t answered her phone since.

We hadn’t even arrived at Uncle Ray’s yet when she rode off on the back of a motorcycle with some younger guy she started chatting up in the tiny grocery at the edge of town. She didn’t even know his name. They came out of the store together laughing. She plopped the groceries in my arms.

“I’m just going for a little ride with… with…”

“Bob,” he finished for her.

“…with Berto,” she giggled as he gunned his bike to life. “He’s just dropping off some parts for repair. I’ll meet you at Tío’s before the party even starts.”

On a Saturday? I’m sure he’s dropping his parts somewhere. “Mamá, I have to leave by 5:00 tomorrow.”

Carmelita slapped my arm, but I wasn’t really kidding. It was hardly the first time Mamá dumped Ricky on us to run off with some guy. Ricky never complained, but I wished he didn’t have to see that. He’s only seven.

Slut. I kept it to myself as I watched Bob’s bike speed away.

Checkout time at the motel was 1:00, so everything was packed up in my car, even Carmelita’s things. Her car was parked at Uncle Ray’s. It was a long way to the motel from his house and taking two cars would have been a waste of gas. We’d been sitting there in the parking lot more than four hours, taking turns with the charger, because Mamá couldn’t be bothered to turn on her phone.

At 6:00, I finally called work and left a message. “Hey Rach, it’s Ana. Can you tell Mr. Adams I’m really sorry? I can’t make it in to work tomorrow. I have kind of a… family emergency…” The fact that I was asking Rachel to lie to my boss for me made me almost as mad as the money I was going to lose. Mr. Adams would be pissed at the truth, and I needed my job.

Bob’s motorcycle finally rumbled into the parking lot about 7:30, with the sun already dropping behind the trees. Carmelita got out to talk to them. She’s almost two years older than me, but sometimes it feels like she’s the little sister. She ran up and hugged Mamá and I could tell she was whining about how worried we all were.

“We’re going to go sleep at Tío’s,” she said when she came back.

“Where the hell is Mamá going?” I asked in shock, as Bob’s bike turned and disappeared up the highway in the wrong direction.

“She said there’s no place for her to sleep at Tío’s.”

There was no place for anyone to sleep. Half our family was staying one more night. Poor Ricky had to cram into a living room floor so packed with sardines, there wasn’t room to slip in a cracker. At least our family is mostly boys, so Carmelita and I had a room where we could breathe. Not that I wanted to. A house full of guys who had been eating and drinking all day at a fiesta… I’ll say it was aromatic.

I woke up in the morning to a kink in my neck and the sound of Bob’s engine in the driveway outside. I shook Carmelita awake and stepped carefully through the maze of bodies to the bathroom. I stepped on one of my cousin’s hands but he didn’t even move.

The girl in the mirror was a mess. My white dress was crumpled and shabby. Bags under my eyes and the remains of yesterday’s makeup made me look like the ghost in a bad horror film. I ran a washcloth quickly over my face, pulled some of the tangles from my hair,  swished some mouthwash, and then tip-toed back through the battlefield and outside, slipping my shoes on when I reached the porch.

Bob was turned around backwards on his seat and my mother was straddling his lap. Hard to believe she had barely known him 48 hours. I walked over and cleared my throat.

“I’m going to take Lita down to her car and I’ll come back and get you.”

“No. No podemos dejar aún,” she said. “Your Tío is making breakfast for everyone. He is already at the park.”

“He won’t miss us, Mamá. We weren’t supposed to be there anyway.”

“¡Que vergüenza! All the trouble he went to. Show some respect.”

Respect. I watched in disgust as she ground her self-respect against Bob’s lap while they said their good-byes. She dismounted him just as Carmelita and Ricky came out onto the porch. Bob rode away.

Furious, but unable to vent it, I seethed inside all the way to the park. Uncle Ray wasn’t even cooking yet and we had to wait for all the zombies to show up before we could eat. Freshly watered grass soaked my sandals, trying to suck them off my feet by the heels. By the time I lined up to be served, I was so mad at Mamá I could scream.

Scrambled eggs and cheese, rice, greasy hash browns, and chorizo stared me in the face. It all looked delicious, but fattening.

“I’ll just have some fruit,” I said apologetically.

She knew how much it would sting. To swear me to her secret and then insult me this way… I whirled to face her.

“¡No es México, Mamá! I wasn’t born in México. This is my country.”

“This is how they talk to their mothers now,” she said to Ray, and then to me again, “Is not about a country. Es tu familia. Somos tu familia. Tu escupes en nuestros tradiciónes.”

I didn’t miss work for this. Mr. Adams likes me. My job would still be safe this time, but I couldn’t afford the money I was losing, not for this. I had rent to pay and books I needed for college.

“Do I have to put salsa verde on my hash browns to be Mexican now? Is that Mexican tradition?”

“Your Tío prepared this food and you insult him.”

“Your diet can wait. This is a tradition.”

I forgot myself, forgot Ricky was listening, forgot the world.

“¿Y qué hay de ti, Mamá? Where were you at the party? Is it tradition that I have to lose my pay so you can slut around with some guy you never met before? Is that Mexican tradition too? You didn’t even know his name! Is that why Lita’s father left you? Was that a Mex…”

Mamá’s hand struck my cheek like a rattlesnake. Carmelita’s plate fell to the ground behind me, and there was quiet everywhere as Mama’s eyes searched Carmelita’s. It wasn’t a secret anymore. I turned, but Carmelita was already running away in tears.

He walked around the table to give me a hug. “Mi sobrina, mi hija,” he kissed my cheek. “I’ll take your sister back.”

Six hours is a very long time, but not one word was spoken between us the whole way home. Mr. Adams was the only interruption. He called to offer me more time off if I needed it. I assured him very deliberately in Mamá’s direction that I was on my way home and I couldn’t afford to lose any more pay. She didn’t even blink.

It was Ricky who finally said the only words, as he leaned back in my window to kiss me good-bye. “It’s not fair,” he whispered. “You should get the money from the motorcycle man.”

I only speak Spanish in my sleep. I wake up knowing what I said but not how to repeat it so feel free to offer corrections.

Image "Webster's Kiss" © 2011 Anne Schilde Thanks always for reading! ♥
View all posts by Anne Schilde →
This entry was posted in Annie's World and tagged Fiction. Bookmark the permalink.