The Most Fearsome One 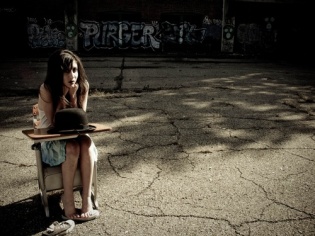 Written for Mindslam's Write Wednesdays #15. Click the pic for the original challenge.

There is no creature that I fear more than the creature they call Man. Ooh, if only I could be one of those, I would be truly fearsome!

If I were a Man, I could flaunt my dominion over every other species, saying, “Rawrrr! Revere me. Fear me. I am a Man!” I could invent amazing tools to efficiently obliterate the others leaving them to rot while I wear their tusks and their teeth with unequaled pride. I could pillage an entire planet and poison her skies and her streams. When there was no creature left that did not cringe before me, I could hunt down the women and children of my own kind and rape them and beat them for the joy of their screams.

Oh, you, my fellow Man, you might seek me out to punish me, to bring justice upon me. But I could pose as your friend, or as your ally, or as your teacher, or as your leader. I could infiltrate you. I could steal from you all that you had ever worked for in your life.

As my lust for terror grew, I could sate it by slaughtering other men by the hundreds, by the thousands, because their flag was the wrong color or perhaps their skin was. I could capture them and imprison them, torture them to reveal their secrets, until everyone who was not like me was exposed. I could burn their towns and rape their women and children too, and make them beg for my mercy. And then I could show them none, kill them all!

And when all was conquered and I stood alone above a desolate and defeated world, I could scream, “Rawrrr! Revere me. Fear me. I am a Man!”

There is no creature that I fear more than the creature they call Man. Ooh, if only I could be one of those, I would be truly fearsome!

Image "Webster's Kiss" © 2011 Anne Schilde Thanks always for reading! ♥
View all posts by Anne Schilde →
This entry was posted in Annietorials, Stuff... cuz I like to write stuff! and tagged Editorial, Write Wednesdays. Bookmark the permalink.

22 Responses to The Most Fearsome One