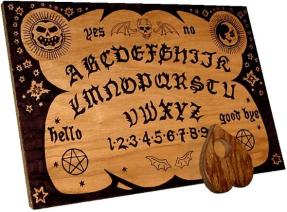 Written for Mindslam's Write Wednesdays #14. Click the pic for the original challenge.

It was a night we could never talk about without everyone calling us crazy, or maybe even liars. I remember it ever so clearly. Jessi and Missy and I sat around a table, huddled in the darkness of Jessi’s attic. A stupid pentagram of candles flickered around us.

We’d pulled the small table into the middle of the attic floor. Windows were all closed tight, the house was quiet below us with the Warrens retired to their evening entertainment, and the three of us were of a focus we will all flatly deny involved any beer. The center of that focus…? A small brown piece of hardboard with a little wooden planchette and the mystical name: Ouija.

You have to say that all mystical-like or you don’t get the effect. Like a breath… Uwee-zhah. See? That’s more mystical. Spooky. Except there’s nothing really spooky about a piece of hardboard.

We settled down and placed our fingers on the little heart-shaped pointer and Jessi began asking it questions. At first nothing happened at all. I joked that Jessi’s board was broken and she should take it back. We had some laughs over the questions it didn’t answer and then suddenly the pointer moved and stopped again.

“Don’t push it, just try to follow it,” Jessi said.

My eyes rolled involuntarily. I hadn’t pushed anything and it had moved toward Missy, not away from her. If anyone pushed it, it was Jessi.

The pointer moved more purposefully now, gliding slowly at first, it’s little window pausing over a few letters, but nothing that made any sense. Jessi looked at me.

Missy looked incredulously back at us. “I can spell,” she said indignantly.

Jessi grinned with excitement. “Magical spirit of the Ouija, give us your wisdom. Speak to us!” I shook my head. The pointer slid over to the word, hello.

“I so did not do that!” she said. “Come on, concentrate.” Then to the board, “What is your message for us tonight?”

Nothing happened again at first, but then the pointer moved, slowly, deliberately stopping over the letters which Missy read aloud at each pause.

Giggles rippled around the table as we each imagined which of the other two had spelled out the words.

“Ask it a question none of us would know,” Missy said.

Jessi smirked. “Who is Melissa’s boyfriend with?” I could feel the instant tension in the air as Missy bristled at the question. She was only with us because Tyler had called to cancel their date earlier and Jessi had kidded her that he had a date with someone else.

There was a brief silence while Missy chose between anger and tears. “Fuck you, Jessi!” she stood up. “It’s not funny.”

“You know what? I’m done,” Missy snapped, flashing a glare at me. “I don’t want to play this anymore.”

“Come on, we need three,” Jessi urged. “No more questions like that, I promise.”

Missy was visibly upset. She needed to sit down, get her mind off of Tyler and the date.

She took a deep breath, sorted out her options and reluctantly sat down with her fingers back on the pointer.

“You said ‘we’,” Jessi started again. “What are you some kind of weird collective? Are you dead spirits?”

“Pfft! Aliens?” Jessi almost spat. I could tell she was sure one of us was playing with her, maybe Missy trying to retaliate, but she was going to have fun with it. “Like from outer space, aliens?”

“Well then why did you say you were aliens, if there’s no such thing?” Jessi’s giggles were shaking the pointer now and we had to wait for her to stop.

It was my turn to pull my fingers off the planchette. Only inner space? That answer was a little too esoteric for either Jessi or Missy to have said.

“What’s the matter?” Jessi asked me.

I shook off her question in silence. I didn’t want to say what I was thinking. Weird shivers had been running down my neck and through my arms, and my fingers were almost numb. I thought at first it was just from hanging my arms out over the table too long, but now I was beginning to wonder if I was somehow moving the pointer without knowing it. She widened her eyes at me to ask if we were continuing, and I put my hands back.

“What is your name, oh aliens from inner space,” Jessi giggled, enjoying this far more than either Missy or I was.

“Who is Pa-u-am-ma?” Jessi pursed her lips comically struggling to enunciate each vowel as if someone was pinching her lips while she talked. It made all three of us laugh.

A colorful and abstract picture of a crab nebula exploded in my mind and I jerked my hands away from the board, this time in shock. I had forgotten about my dream until the board reminded me of it. How could it know? Jessi gestured with open palms to ask me what it was that I supposedly knew. The dream image swam around in my head dragging my stomach along with it.

“What if crab nebulae aren’t the remnants of super novas at all?” I wondered aloud. “What if they’re really some kind of celestial organisms?”

Missy scrunched her face up, obviously with no clue what I had just said. I was the only one of us who thought science as an elective was a cool idea.

Jessi’s look was more one of impatience. “You know you’re supposed to get three meals a day, right professor?”

I handed her a fake smile. “It’s just I had this weird dream where there was this glowing crab thing out in space, but it was like a hermit crab that outgrows its shell and has to find a new one. I think the Ouija board was talking about my dream. Pau Amma is a…”

“Hahaha,” Jessi interrupted in laughter. “Mind-reading, inner space crab aliens are coming to get us! Wooo…”

“Come on,” She gestured back to the board and we all put our fingers back out.

“What if I said I love crab cakes?” Jessi asked and burst out laughing again.

The pointer sat frozen except for the jiggles from her laughs.

“Okay serious,” Jessi said, her words in contention with her expression. “Was Flower right? Were you talking about her dream?”

The planchette slid easily to the right and then shot off the board across the attic and bounced off of the wall, breaking into two pieces. Our fingertips sat delicately poised over the words good bye, while our startled eyes glanced nervously at each other in the realization that none of us could possibly have been responsible.

We unanimously agreed that there was no further need for contact with the Pau Amma. The Ouija board went promptly back in its box, Missy and I went home and we all forgot about it. At least we tried to forget about it anyway.

Mama drove me to school the next morning to save me a walk in the rain. The music set finished on the car radio, and the news broke in. My mind was already wandering ahead to where Jessi and I usually meet on rainy days when the broadcast pulled me away from my thoughts.

“Scientists at NASA this morning are baffled by a new phenomenon they are calling the Hermit Crab Effect. According to their report, a crab nebula identified more than fifteen years ago simply disappeared and reappeared in another position in the galaxy. They estimate the distance it moved at over 700 light years…”

Image "Webster's Kiss" © 2011 Anne Schilde Thanks always for reading! ♥
View all posts by Anne Schilde →
This entry was posted in Annie's World, Stuff... cuz I like to write stuff! and tagged Annie, Fiction, Jessi, Write Wednesdays. Bookmark the permalink.

23 Responses to What If?