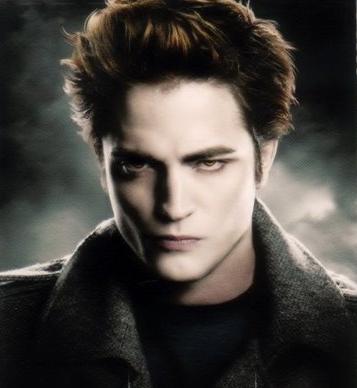 Click the pic for the original challenge. Written for Mindslam's Write Wednesdays #4. Yeah he's hot, but that sticking the teeth in me thing? ...deal breaker! Maybe someday I'll share my vampire with you.

The word we use for it is “predatory” and it’s an attribute of human nature I don’t understand. I see it. I even know how to feel it and recreate it in a disturbingly believable writing style. It’s far more common than I’m comfortable with, from the bullies in grade school to the freaks who see children as objects of pornography. It makes no sense to me why you would take advantage of another person this way.

One of the things that seems evident to me, is that those who behave in this predatory fashion, not only know it is wrong, but they are thrilled by it. It’s common for them to get worse as time goes on. Their disgusting acts become mundane and they need more to satisfy their demented needs.

The imagery that creates for me is one of vampires. Lifeless creatures who prey on us, sucking our blood which only increases their thirst. If they leave us alive, it is only to suffer their defiling curse. How interesting it is to me that our culture today adores and idolizes these vampires, sees them as romantic, and yet they are so very like this man who preyed on young men, taking them for their sex and leaving them defiled by his curse. Of course, today’s idiot, blood-sucking freak is Jerry Sandusky.

I recently commented on a completely different topic, noting that the only real glasses I ever saw with tape on them were like that as the result of a bully. I was in 7th grade when I watched two boys picking on Kenny for no other reason than because he was different. Kenny was near-sighted, had a brain disorder, and he had a face only a mother could love. He was, in the bullies’ eyes, inferior. Similar behavior is exhibited by some pack animals when they maim a weakened or injured member of the pack and leave it to die.

I did my best to defend Kenny. I’m afraid my words were my only formidable weapon. I picked up his books and broken glasses afterward and I carried them for him. I tried to tell him the boys were just stupid. I did the best I could to be his friend. It wasn’t possible. Kenny lived in a very different world, and he didn’t seem to understand or appreciate my efforts. To him the world was full of people like those bullies.

Before we finished middle school, Kenny’s cornea-transplant failed. He lost his eyesight completely and was transferred to a school for the blind. Shortly after, we got the news that he had died.

I share this story here because the moments that Kenny had left in his life were few enough and precious enough to make my point hurt and I want it to hurt. It was unthinkable to me that someone would want to make his life more miserable, make him live those moments persecuted, shamed, and in pain. I broke down crying for weeks afterward whenever I thought about that day and I beat those stupid kids up a hundred times in my head.

We don’t have to be physically impaired to be precious. The simple theory here is that all we have to be is born. And yet this vampiric sodomizer of young boys was born too, wasn’t he? You know what? I’m having a tough time feeling the love. You’ve probably guessed by now that I know what it’s like to be a victim of abuse, but this isn’t about me. It’s about eight young men who lived to wear a curse. To them, the world is full of people like Jerry Sandusky.

I know I’m not supposed to judge. This man is a predator and that is not my judgment. He stalked his prey, he baited his prey, he made his kill, and he feasted on their flesh. I’m pretty sure that’s just the definition of a predator. My judgment is that this man is a sociopath. His apology to the mother of his victim and the face he wears in handcuffs show me complete apathy. There is no remorse, no compassion, even for himself. It is the face of someone who simply got caught. It is the face of a vampire apologizing because he sucked your blood.

Yeah, you suck, Jerry. Go directly to jail. Do not pass the Blood Bank. Do not collect any more victims.

Image "Webster's Kiss" © 2011 Anne Schilde Thanks always for reading! ♥
View all posts by Anne Schilde →
This entry was posted in Annietorials, Stuff... cuz I like to write stuff! and tagged Abuse, Editorial, Write Wednesdays. Bookmark the permalink.