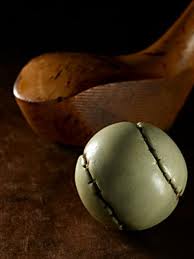 Haha! I really want to hit one of these now!

Diarmad studied the curvature of the jutting crags outlining the long seventh hole. The small cove the fairway wrapped around was much wider than it was across. Picturesque cliffs, carved by the swollen winds from the sea,  sloped down about  thirty feet to the rocks and sands below. The fairway drifted around to their right, with the wind blowing easterly over the loch from the sea, friendly to their play.

Proudly down one on the last hole, Diarmad teed first. He placed a creamy white featherie, bearing a small crest with a sea eagle, down on the little mound of sand he’d poured. He drew his heaviest solid wood club, inspected the long smooth shaft with his fingers, took a few practice swings and then calmly drove the ball out along the left of the fairway. It arched gracefully along the south face of the cove. Carrying in the breeze, it pushed back and dropped nicely onto the flat area between the roughs to their right. He clapped his hand down hard on his arse, spanking himself in congratulation as his ball bounced comfortably to rest in the center of the fairway. “Put me down for five now,” he gloated.

“Five, hmmph,” grunted Angus, offering no respect for his friend’s nearly perfect drive. “Holing her in three.” He teed his ball and pulled out a shorter long-nosed wood, lining up his aim out over the water and into the teeth of the wind.

Diarmad laughed heartily. “You’re a fool, McVie!” he sputtered. “Three’ll only be counting your misfortunes!”

Angus stopped to survey the cliff edge and distances one more time carefully. Those would be some expensive drops. He’d brought his finest balls. For the guineas three drops would cost him, he could replace his whole set of clubs. “You’ll grant me a drop, if she flies long?”

“Aye,” Diarmad agreed with a nod. “If you play that club and your ball be lost, you can drop another for a stroke.” He glared at Angus. “But you’ll drop it from here.”

The guarantee was satisfactory for Angus. It would take a perfect shot, but if he placed it exactly on the lip of the cove, a solid second drive that carried in the strong wind, would easily sail across the cove shaving two strokes. He sliced the ball up into the wind out over the traigh below. At first, the wind threatened to let his ball fly, but then as if magic were at play, a gust rose up and brought the ball curving back in.

Diarmad barked at Angus’ ball as if his coaxing would steer it proper.  But his excited cries turned to a groan of dismay,  as it landed on the edge of the cliff, bounced twice, kicked off a rock, and disappeared from their view. He recovered quickly and slapped Angus hard on the back. “Flog me!” he cursed in mock chagrin. “I didn’t think you could with that club. There’s your first drop!”

“I drop nothing,” Angus muttered with confident resolve, returning his club to his bag. “She’s there.”

His friend stood silently at the teeing ground shaking his head as Angus strode stubbornly off to the spot where the ball had disappeared. Stubborn was Angus’ middle name. The two men had been golfing many times, always with the same wager, and always with the same result. The loser had to return to the pub wearing only his leine, an open invitation for the other men to flail him in passing. Angus had lost this bet so many times, some of the townsmen referred to a certain shade of red as “Angus-arse”.

Today, Angus was on his game like never before, down a stroke after six holes, and looking to make it three. Diarmad didn’t relish the idea of losing the bet for the first time, but this was going to be an improbable shot even if Angus found his ball. It was less than a furlong to the other lip of the cove. With no wind, a strong golfer such as Angus was, with a quality ball such as Angus had, could make that distance with ease. But he would have to add another fifty yards in this gale.

Angus arrived at the cliff edge. At first, he appeared disappointed. But after a moment a triumphant fist shot into the air. He turned around and called out, “Aye, she’s there! By my judging, you’re back ball!”

His adversary was having none of it. “The Devil, you say,” he called back. “Not until you’re on the fairway, I’m not.” Just as the words left his mouth, the soft, weathered soil on the edge of the cliff gave way under the unaccustomed weight, and Angus disappeared from view. “Angus!” Diarmad cried out. He threw down his bag and raced to the edge to look down. Angus lay sprawled awkwardly among the rocks below.

Diarmad quickly found a path where he could slide down and raced to his friend’s aid. Angus was sitting up now from where he lay among the rocks, dazed but alive. Blood trickled down the side of his head, mingling with sand and sweat in his tangled hair. When Diarmad arrived at his side, he was staring blankly in front of him the way a dying man in the desert might stare at a mirage.

“Is anything broken?” Diarmad asked.

“I’m going to have to get a ruling,” Angus mumbled dreamily, still staring vacantly.

“A ruling you say?” Diarmad chuckled with relief. “If you have to ask me, then I say dust yourself off, mate. Nothing’s broken you can’t play through.”

“Nie, not that,” Angus shook his head. He pointed past his toes like he was pointing at a bean-shìth. There in the sand, only  a few feet away, lay his ball.

Diarmad roared with laughter. He stared back up the face of the cliff and laughed all the harder. “Well,” he said, when he finally calmed down. “The rules are plain. If your ball be lost… This wee lass doesn’t look lost to me!”

“Play her where she lies then?” Angus asked ruefully.

“Aye,” nodded Diarmad offering his friend a hand. “Aye, you bet your arse!”

Image "Webster's Kiss" © 2011 Anne Schilde Thanks always for reading! ♥
View all posts by Anne Schilde →
This entry was posted in Stuff... cuz I like to write stuff! and tagged ♥ Favs, Fiction. Bookmark the permalink.