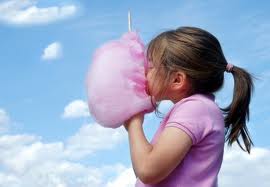 I ♥ LOVE ♥ the taste of cotton candy!

My best friend Jessi is a very pretty blonde, a little bit taller, nine months older, and a lot sexier than I am. She has the cutest squint when she smiles that makes her look like a pixie and she hates it when I tell people that. She’s been my best friend ever since I moved to Great Falls when I was five.

During the summer after 9th grade, Jessi and I made our first unchaperoned trip to the Madison County Fair. It was extremely hot and unbearably muggy that day. I was dressed in black shorts and a red shirt I’d knotted into a half-top as soon as I was safely away from the house and Daddy’s watchful eye. Jessi wore faded denim cutoffs and a green bikini top. She had on giant white-framed Hollywood sunglasses that covered half of her face. It was nearing the end of summer and both of us were sporting some pretty dark tans.

We spent all day at the fair. Everywhere we went, every ride, every attraction, we kept running into the same two boys all over the place. We were pretty sure they were following us and we kept waiting for them to approach us, but they never did. We stopped several times to talk about them, scheming how we could accidentally bump into them and stuff. They were both pretty cute, at least from a distance, and we did all we could to let them  know we’d noticed them noticing us… looking their way, giggling and nudging each other.

Toward the end of the day, we stopped into a big grey building with a rounded corrugated roof. It looked like an old military mess hall or something. I saw the boys off in the distance as we stepped inside.

“I just saw them again, over in line at the hot dog stand,” I told Jessi, laughing. “Blue Shirt was watching us walk in here.”

Jessi shook her head, “I know.”

I couldn’t tell if she was losing interest or she was just giving up on them. The hall held an Arts & Crafts exhibit. We walked around inside it, checking out all the displays, mostly drawings and paintings. We came across a section of some artwork that was all from other kids in our school where we spent a good long time looking at them with our expert critical opinions.

“I really don’t get how this won a blue ribbon,” I said.

I was lost in the details of a painting by a girl named Michelle who Jessi and I both knew. It was just a bunch of blue and black patches. It did vaguely resemble a lady in a bonnet, but really, it was just abstract patchy stuff and seriously, I might not have got that if it wasn’t titled Blue Bonnet. I had better accidents with my first-grade finger paints and no one ever gave me any award.

Jessi shrugged. “It kinda looks like shit, doesn’t it?” She said it really loud.

We laughed and moved on, but I looked around over my shoulders now, suddenly conscious of the fact that someone else we knew, even Michelle herself could be within earshot. I wasn’t sure I cared. Jessi made me feel that way sometimes, like it didn’t matter what anyone thought, as long as I still had her.

Over in another area we found a 3-D model of a town depicting something I couldn’t really make sense of. It might have been a futurama. Whatever. What was important to me was that it was done by a Girl Scouts troop from where I used to live before I moved to the town where Jessi and I now live. I knew a couple of the names on the credits and one of them was my friend Carla’s sister.

For a moment, I was lost in the middle of a daydream, my mind wandering back to my years before Great Falls. I wished I could see my friend again. Memories have a funny way of seeming more important when you realize you forgot them. It’s kind of silly because if they were really important, you wouldn’t have forgotten in the first place.

Carla used to have a rope swing on the big elm tree in front of her house. We would swing up on it as high as we could and jump out. The boy who lived next door to her was scared to do it and we used to tease him about being a fraidy-cat. One day, we got him on the swing and after we teased him enough he tried to jump. But then he got scared and tried to hang onto the swing and he fell all crooked…

“Earth to Flower,” Jessi said, her fingers snapping in front of my eyes.

Her hand pulled me back into the exhibit hall and down the aisle to look at more displays. I started looking all over for the boys again, expecting to see them with dogs on sticks, but they never came in the building.

After we left the exhibit, it was getting late. We got in line for one more carnival ride with swinging seats suspended from long chains, that reminded me of that boy falling from Carla’s swing. There was a big green dinosaur head as the theme for the ride. It looked more like a dragon than a dinosaur. Giant skewed letters outlined by light bulbs spelled out the name, VELOCIRAPTOR. I looked over my shoulder and laughed aloud. The two boys were standing in line behind us again. I nudged Jessi.

“They’re ba-ack,” I whispered in her ear.

Jessi looked over at them and down the line. I could see her counting mentally. “They’re gonna get stuck on the next ride,” she said.

We got in our seat on the ride and as the ride was filling up we could see the boys suddenly negotiating to move forward in the line, but they get stuck two from the end and had to wait for the next ride, just like Jessi said.

The ride started up and Jessi gave the boys a little flirtatious wave as we swung up away from gate. I couldn’t tell if they saw her or not. I wanted to smack her for it, but the ride was swinging us around a lot and I had to hold on. I don’t do well with heights at all and I was afraid I’d lose my stomach.

I was really giddy by the time we got off. It was almost time for us to go home now and we had a little money left. Jessi wanted to stop in one of those photo booths that charge you way too much money for two sets of the same four pictures. We got in the booth together and made some funny faces and smiles and then just before the fourth frame, Jessi shocked me.

She didn’t wait for me to think about it. She just grabbed me and planted one on. I kissed her back in surprise. I heard the fourth photo snap, but we didn’t stop kissing. Our kiss became serious. I felt Jessi’s tongue touch mine, soft and tentative at first. It was exciting and I didn’t want it to stop. Jessi tasted like cotton candy, and… and like Jessi!

I’d never kissed anyone before. My heart was starting to beat really fast. Jessi reached up while we kissed. Her hand brushed gently against my left breast sending shivers through me and suddenly it hit me that I was making out with my best friend. I freaked out. I jumped and pulled away from her. My emotions were suddenly a jumbled and confused mess, spinning around inside me like we were still on that last swinging ride.

I was afraid Jessi would be hurt that I had pulled away, but she looked just as startled and confused as I felt. The two of us just sat there for a moment, staring at each other kind of in shock and speechless. I thought maybe I wanted to kiss her again. Her lips were trembling and it seemed like she wanted to kiss me again too. Then we heard the machine spitting out our pictures. Our eyes went wide as saucers as we both realized at the same time we didn’t want anyone else to see those pictures. Suddenly full of giggles, we scrambled over each other and out of the booth to collect the evidence before anyone could see.